My baby has returned safe and sound from her school journey. I have missed her unbelievably but she has had a good time and has returned with just a wee bruise on her knee; which isn't at all bad considering the amount of activities. My mind conjured up broken limps and black eyes throughout the week and each time the phone rang I expected the worst; thank the lord my fears were unfounded. Well almost......
Apparently the holiday didn't start too well as the coach driver was totally incompetent and crashed the coach two miles down the road!! They then had to sit in a church year for FIVE HOURS until another coach was available, or rather another coach driver as they, thank goodness, insisted on another. Eventually they got to the place about 10:30pm totally worn out!
Here is a picture of Amber when setting off. 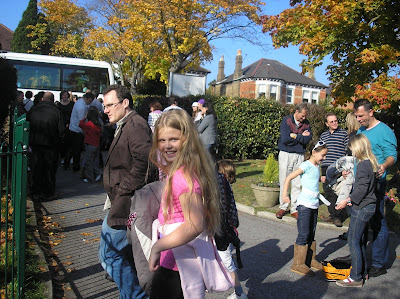 Amber also accidentally got left behind in a cave and screamed in anguish of the total blackness surrounding her! She said she had never been so scared in her life! The consequences of that is that she now has to have a light on to sleep, but hopefully that will pass in time. Poor little sausage :o(
But she is back, safe and sound and the family is once again complete :o)
Posted by Karen Mortensen at 12:24 1 comment:

Acetate with a Hint of Pink

Crikey, that was a close shave. Well not really a close shave as the deadline has passed and I didn't get my DT card for Dottie's World made in time. It has been a crazy weekend so far and I honestly haven't had any time, so I just TOOK half an hour to quickly make my DT card for Dottie's World, and half an hour is literally how long it has taken me, including taking pictures etc. Must be one of the quickest cards I have ever made so I apologise for any mistakes! Check out Dottie's World for some fabulous cards from the design team.
I love this cat image from the Cat Collection and grabbed the chance to use it today. Here is the challenge from Nicola:
A is for Acetate with a hint of pink!!It can be a whole acetate card,an aperture of acetate,an embellishment as long as Acetate is there some where & as October is Breast Cancer awareness month I'd like to see some pink!!!
My card is acetate folded in half and rimmed with Cotton Pink Stickles (not quite dry so excuse any stray bits). The cat was printed on a sheet of Prima Whisper "Sigh" paper and Cotton Pink Stickles has been applied to the circles. This is double-sided so it looks good from the other side too. I cut the ball out and matted it on a K&Co Wild Saffron Tag. It has a pink acetate flower in the centre with a Basic Grey brad in the middle.

The corner has been cut out from the same sheet of Prima paper and dotted with pearls. 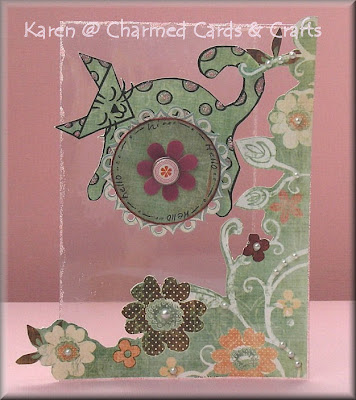 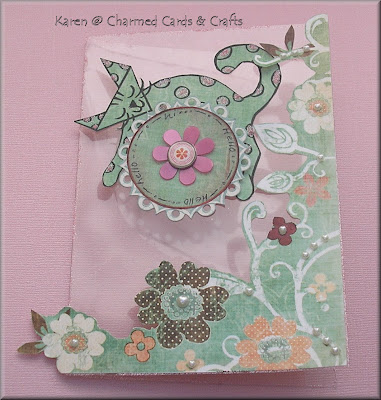 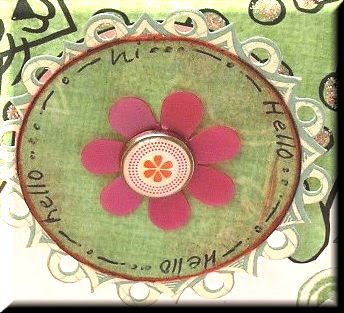 Pop over and join in the challenge :o) 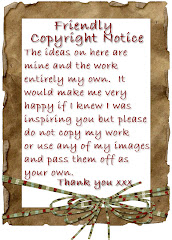